Check back often for news and announcements!

COVID-19: Message from Our Chairwoman and President

COVID-19: Message from Our President 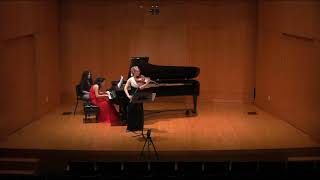 COVID-19: We Are Operating as Usual

Author T.A. Barron on Collaborating with Si-Yo to Inspire Children

With its ability to enthrall, educate, and inspire, storytelling can take numerous artistic forms. Two of those forms—music and literature—make the perfect pair with Si-Yo’s Power of Pondering (PoP), an educational outreach series for children ages 8–13 that awakens empathy and imagination with the transcendent power of music.

Combining original musical performance with spoken word, the initial program is based on T.A. Barron’s popular children's book “Tree Girl" and is intended to be performed in libraries, bookstores, nature centers, and community centers. Students are invited to participate by acting out parts of the story and discussing instructors’ questions.

Many children are already familiar with the novel as well as Mr. Barron’s other works; for over 20 years, he has been inspiring children with his distinguished catalog. His loyal following has been enchanted by his engaging stories about nature, exploration, and discovering the hero in oneself.

He is the winner of numerous literary awards including the de Grummond Medallion for "lifetime contribution to the field of children's and young adult literature” and the Nautilus Award Grand Prize; his international bestsellers include the novel “The Ancient One” and the 12-title Merlin Saga, which is currently being made into film by Disney.

Also a longtime environmental activist, he has worked in various capacities for numerous conservation organizations such as The Wilderness Society, which honored him in 1997 with the Robert Marshall Award—its highest award given to private citizens for conservation work.

Read on for Mr. Barron’s thoughts on the PoP pilot program, “Tree Girl,” and the challenges and rewards of writing.

Q: What about Si-Yo’s Power of Pondering series led you to allow the Foundation to use “Tree Girl” for its pilot program?

A: First, I was impressed by the high quality people at Si-Yo as well as their deep commitment to inspiring creativity in young people. Second, they won me over with their concept of combining my story, “Tree Girl,” with beautiful music by gifted performers. When you combine those two elements, how could young people not be inspired to create their own wonderful music and stories?

Q: Did you have any guesses as to how Si-Yo’s presentation of “Tree Girl” would turn out musically?

A: Honestly, I had no idea how it would turn out—but I knew the result would be terrific. The core values of this project and the great professionalism of the people at Si-Yo made me confident it would come out well. In fact, it turned out even better than my high expectations! They’ve created an awesome and original way to get kids excited about creativity in music and story…and I’m sure that it will change the lives of many young people.

Q: Who was the inspiration for Rowanna, the main character of “Tree Girl”?

A: Rowanna may be a young girl, but she is incredibly brave and full of tough questions and big dreams. In that way, she’s a lot like the many strong female characters in all of my books—characters like Rhia, Kate, Elliryana, Elen, and others.

But there is one way that Rowanna is different from the others: She was inspired directly by my two wonderful daughters, Denali and Larkin, who are both full of positive energy, high ideals, and great imagination—as well as lots of love for nature. (Including climbing trees!) That’s why this book is dedicated to “my tree girls, Denali and Larkin.”

Q: You’ve written many female protagonists; how do you give them dimension and interior lives?

A: At one level, writing female characters involves the same basic challenges as creating any characters—how to describe their deepest feelings and dreams so authentically that they really come alive. So I always start by making extensive notes about characters. When you can see how characters look and act, when you can hear their voices echoing, then you've begun to know who they really are. But it's not until they lean close to you and whisper their innermost secrets—their deepest fears, their highest hopes, their innermost longings—that they are real. And if they are real for me, then I know they will be that way for my readers.

Writing female characters adds a whole new level of challenges. When I started writing “Heartlight,” the first book of the Adventures of Kate trilogy, I wanted the hero of the book to be a brave teenage girl. But how was I, as a 30-something man, going to make her feel truly authentic and alive? The answer was clear: I needed to find the young girl inside myself.

So I began by asking my wife Currie a lot of questions about her youth; then I thought a lot about our daughters; and finally I wrote a small biography of Kate, just to get to know her better as a character. This process opened my heart and mind to the experience of being a teenage girl, which was different from my own experience in ways both large and small.

As a result, Kate came fully alive for me—so much so that when I finished “Heartlight,” I decided to write two more books with her as the hero. And I also decided that it would be essential to any books I’d ever write to feature strong female characters. That’s why my books have lots of great girls and women, with authentic yearnings and vulnerabilities and strengths and dreams.

Beyond all the value for my writing, this experience has made me a better dad. I’ve been more present for my daughters as well as my sons…and more compassionate during their childhood struggles. So this entire experience has been a great gift!

Q: You've talked about your desire to spark respect and love for the planet among your readers; has that become increasingly challenging in today’s tech-heavy world?

A: Nature is hugely important in all my books. In fact, I'd go so far as to say that I treat the natural world not merely as a setting, a backdrop for my stories—but as a full-blown character. Places are alive, just like you or me. They have moods, histories, and qualities that can be bizarre, humorous, tragic, mysterious, or inspiring. Part of my job as a writer is to make those places so real, so sensuous, so fully alive, that readers want to voyage there again and again. In this way, environmental awareness is woven through all my books.

On top of that, saving the Earth is about saving our fellow creatures—as well as ourselves. Stories are a wonderful way to convey this idea, sometimes directly and sometimes through metaphors. We all belong to the family of living creatures. Our fate is connected to the health of our planet.

Modern technology makes it both easier and harder to communicate the importance of environmental issues. The good news is, people can be connected and informed quicker than ever before, sharing powerful images and texts instantly. But at the same time, screens are no substitute for reality, and too many young people have been so distracted by devices that they’ve been deprived of real sensual experiences in nature.

If we lose our emotional bond with the natural world—with majestic trees and fragrant flowers, tumbling rivers and moonlit mountains, whispering seashells and surprising creatures—then we won’t have enough passion and perseverance to save our planet. But if we retain that emotional bond, anything is possible! Fortunately, the wonders of nature are amazingly powerful—so if we can just get young people to go exploring the outdoors, then nature will win their hearts and minds.